View and access some of the papers from our research, each with a brief explanation of its conclusions. More will be added as they are published, so check back regularly.

This commentary article addresses a comment critical of our previous Journal of Human Evolution study. In it we correct some of the errors in that critical comment and explain why it contains nothing that undermines our original study. 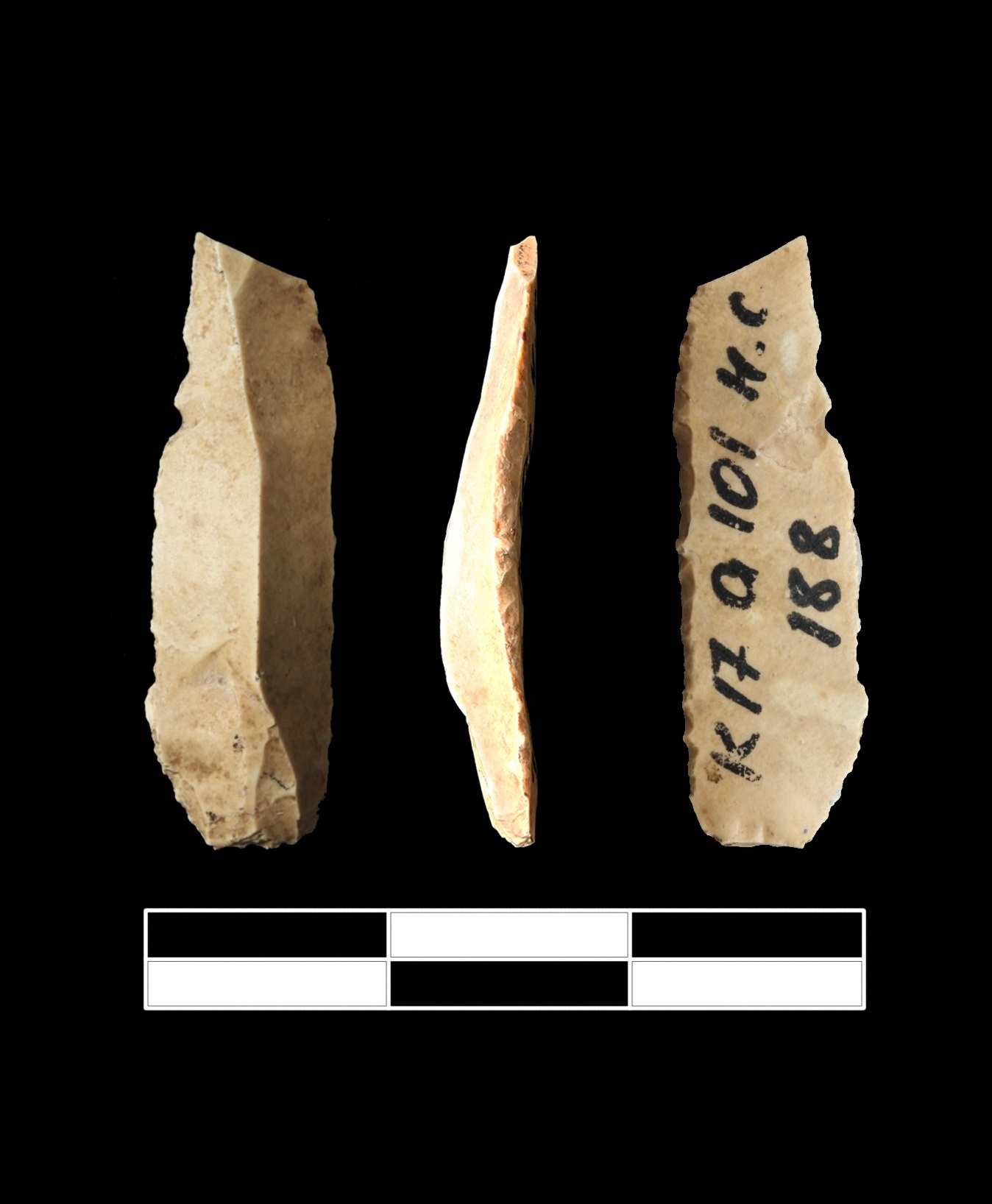 A 41,000-year-old bladelet tool from Kostënki 17. The critical comment claimed that this artefact may not to belong to the Spitsynian Layer II–in fact, there is no reason to question its Layer II attribution.

Thoughts on the structure of the European Aurignacian, with particular focus on Hohle Fels IV

It is often argued that the archaeological record of early modern human occupation in the Swabian Jura (southern Germany) differs significantly from that further west in Europe. A recent (2018) paper revisited this issue. The paper offered new analysis of the archaeological assemblage from Layer IV of the Swabian site of Hohle Fels. It concluded that Hohle Fels IV is older than, and significantly different from, the most comparable material in France and Belgium. In this paper we assess these claims. Our analysis shows that, based on the data presented for Hohle Fels IV, it instead agrees well with the western European record.

We also consider the Europe more generally. Reliable chronological data point to characteristic bladelet tools being present across most or all of Europe at several different points during the Early Upper Palaeolithic. Considering the high mobility of Early Upper Palaeolithic hunter-gatherer groups and the long span of time being considered, this makes sense. A more confusing picture emerges, though, when radiocarbon dates are considered. In our view, however, this is more likely to reflect ongoing problems with radiocarbon dating this period than it is to reflect true cultural difference. 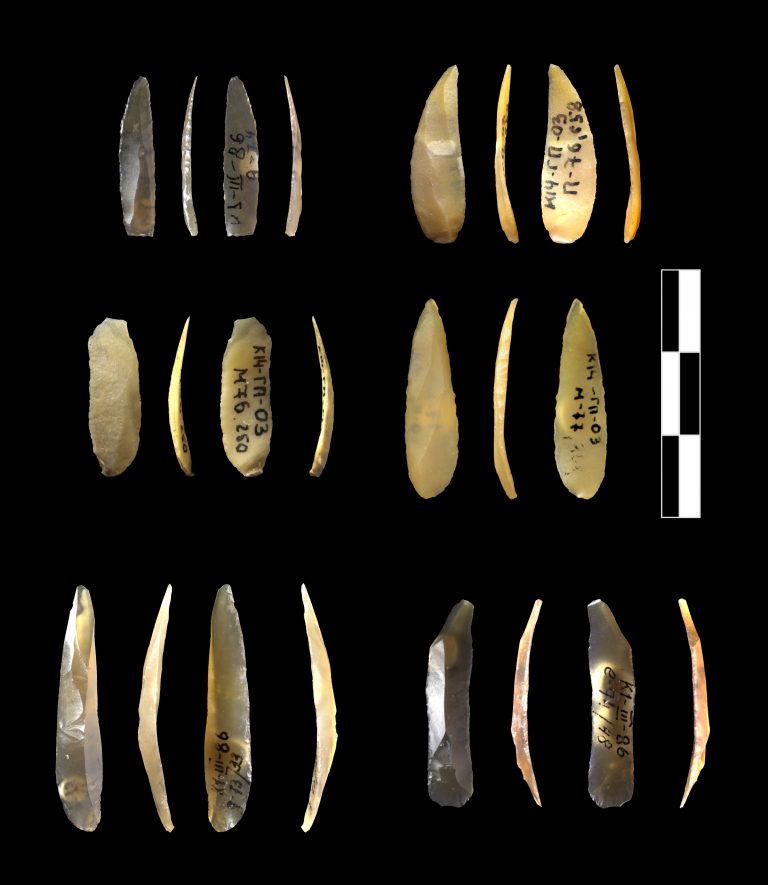 New data for the Early Upper Paleolithic of Kostënki (Russia)

This paper looks at the timing and nature of the very earliest modern human occupations of Eastern Europe. It details new radiocarbon dating work and reassessment of stone tools from Kostënki 17, Kostënki 14 and Kostënki 1. Our results indicate that modern humans were present at Kostënki c.41,000 years ago, at roughly the same time they first appeared elsewhere in Europe. Furthermore, bladelets produced at these Kostënki sites 41,000 and 38,000 years ago match those found further west in Europe at the same times, demonstrating a cultural link that stretches across Europe and possibly beyond.

The main importance of the paper, however, lies in showing that the chronology of key archaeological artefacts and technologies for this period must be understood on a multi-site basis. The unique circumstances at Kostënki – where archaeological layers are found in sequences also containing a volcanic ash layer of known age – means that radiocarbon dates can be independently corroborated. Our work shows that, in some cases, standard radiocarbon dating techniques systematically produce incorrect ages. Multiple dated sites are therefore required to get a reliable age for a particular type of archaeological assemblage. 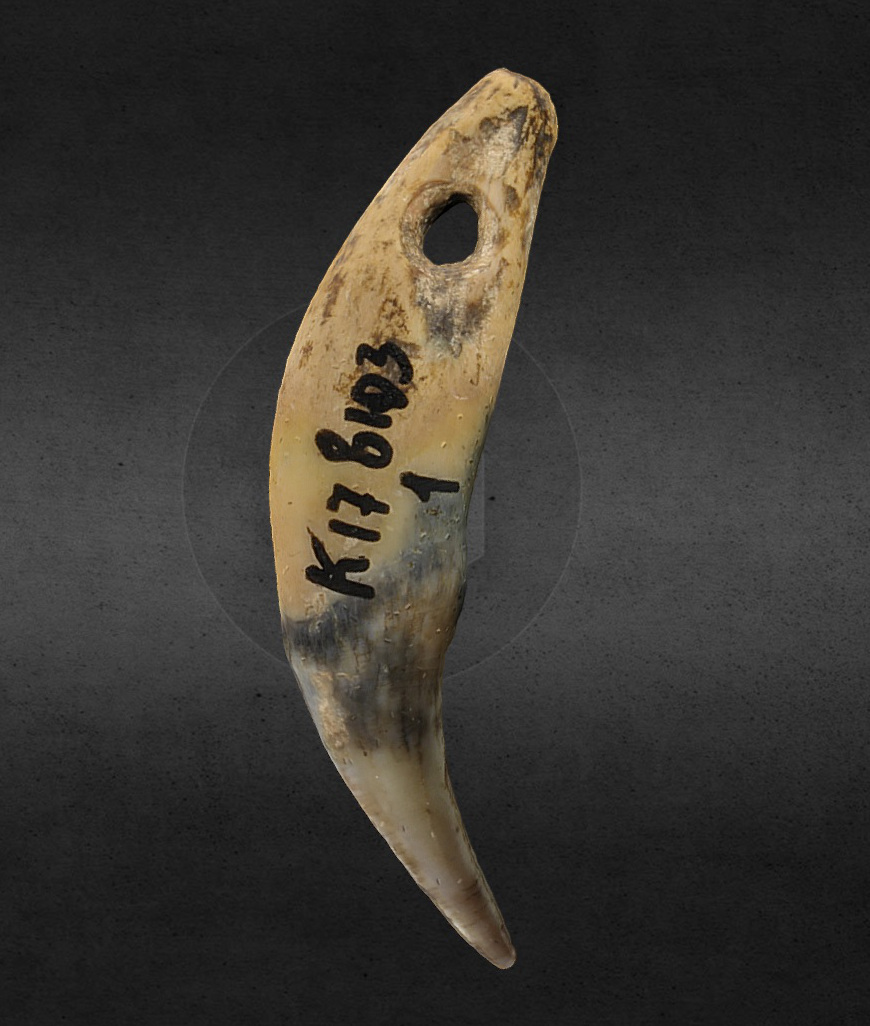 One of the 41,000-year-old fox-tooth pendants from Kostënki 17, apparently left by some of Eastern Europe’s very first modern human inhabitants. These pendants are among the oldest pendants known outside Africa

The Age of the ‘Anosovka-Tel’manskaya Culture’ and the Issue of a Late Streletskian at Kostënki 11, SW Russia

Characteristic triangular, concave-base “Streletskian points” have been found at many of the Kostënki sites, as well as at other Upper Palaeolithic sites in Eastern Europe. These artefacts are often thought to mark a single archaeological culture – the “Streletskian”, named after the site of Kostënki 6 (AKA Streletskaya) where examples were first found. Many consider the Streletskian as a marker of the first appearance of modern humans in European Russia.

At Kostënki, Streletskian points have been found in layers thought to be 40,000 years old or older, but also in younger layers, including a single point from Layer III of Kostënki 11. To test the age of this layer we carried our radiocarbon dating of a wolf burial within it. Our results of c.28,000 years old confirm a late age. However, evidence leads us to doubt that the Streletskian point belongs with other material from Layer III. Most notably, there is no evidence in the layer (or other layers this age at Kostënki) for the manufacture of these points. We therefore don’t consider the dated wolves to necessarily date the Kostënki 11 Layer IIII Streletskian point. 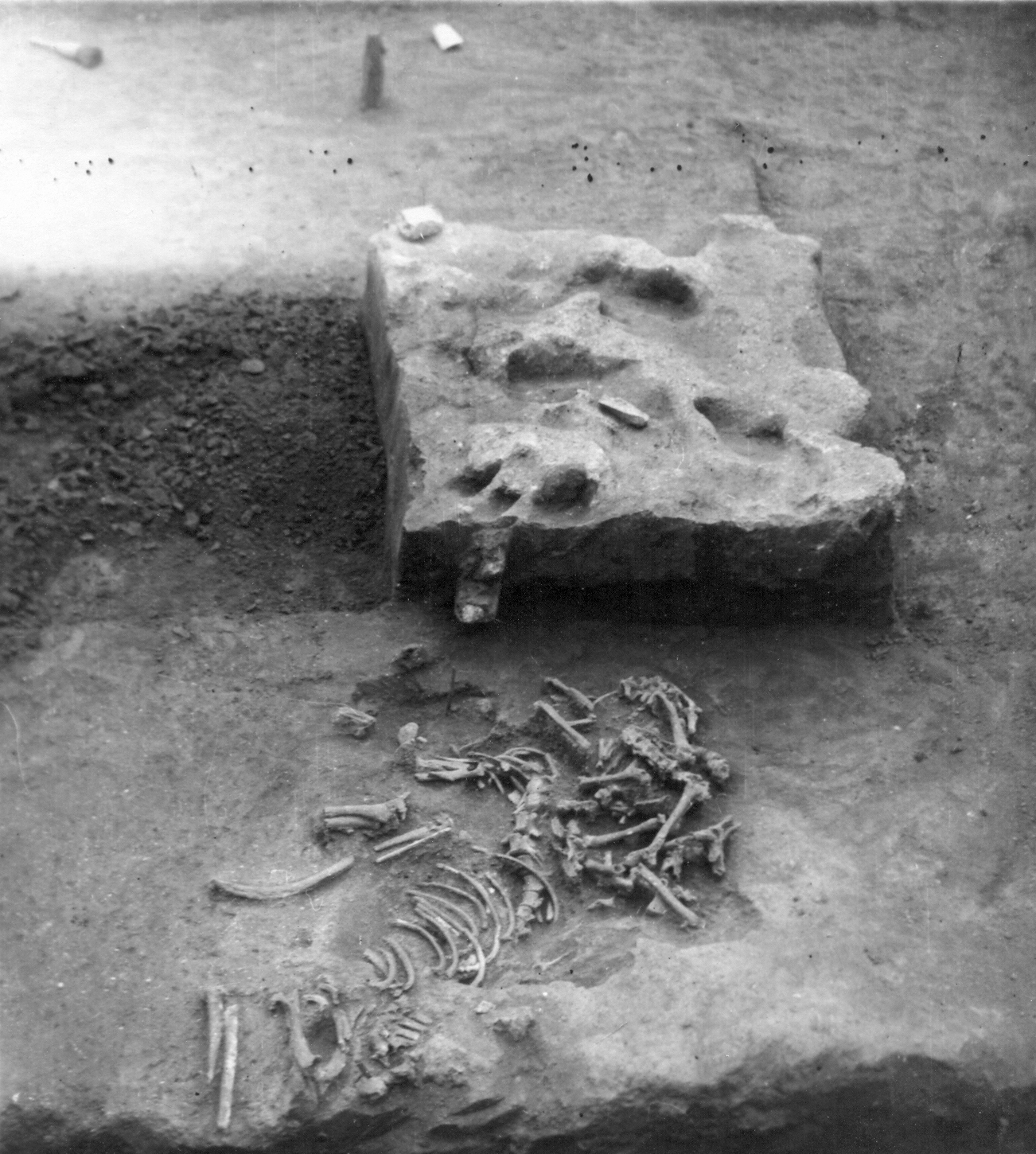 Human burials have been found at five of the Kostënki sites, including the oldest known modern human burial in Europe at Kostënki 14. Getting reliable radiocarbon dates for these burials has proved difficult. The main problem appears to be the post-excavation application of chemical preservatives to bones. Incomplete removal of these during the dating process can result in ages that are erroneously young. In this paper we present a new radiocarbon date for a child burial from Kostënki 18, produced using a new technique being developed at the Oxford radiocarbon laboratory. The technique targets only the amino acid hydroxyproline, thereby more successfully removing contaminants.

Our new date is several thousand years older than previous dates for the burial, and suggests it is almost 28,000 years old. This age is consistent with other archaeological material from Kostënki 18, as well as from the upper layers of Kostënki 1 and 14. We discuss the result in light of an often-made link between Gravettian archaeological assemblages and the appearance of burials across Europe. Although Kostënki 18 is a Gravettian site, several other burials in European Russia pre-date the appearance of Gravettian assemblages. 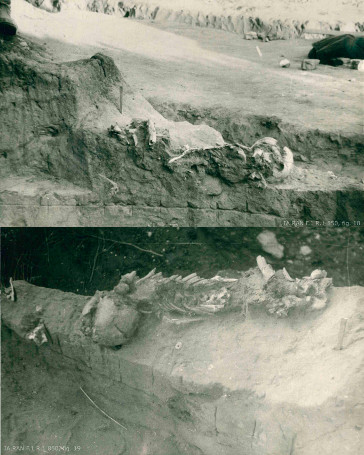 Some observations on platform preparation at Sungir’, Russia

Lithics: the Journal of the Lithic Studies Society

Situated on the outskirts of the Russian city of Vladimir, Sungir’ is famous for its ornate 35,000-year-old burials. The site has also yielded a stone tool assemblage of over 50,000 pieces, including Streletskian points like those found at some of the Kostënki sites.

In this paper we document one aspect of stone tool manufacture at Sungir’. Some blades bear evidence for careful preparatory shaping of the core from which they have been struck. This core modification is broadly similar to that known from several other periods of the Upper Palaeolithic across Europe. At Sungir’, this modification is apparently restricted to those blades and flakes needed to create and maintain the overall shape of the core. In our view this probably relates to the sub-optimal raw materials worked – key steps in the blade core reduction process demanded particular care, and meticulous modification of the core is one expression of this. 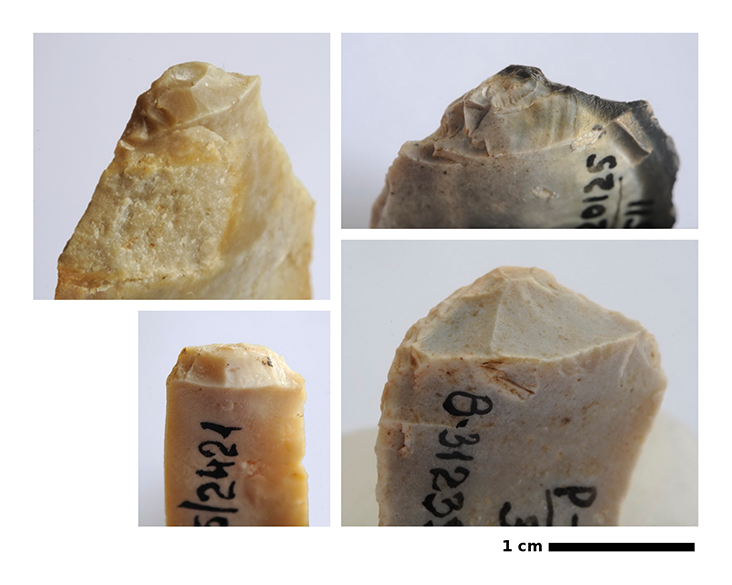 Blades from Sungir' and the nearby site of Rusanikha (bottom right), showing evidence of careful core preparation

Proceedings of the Geologists’ Association

As methods improve, radiocarbon dates for the period 45-20,000 years ago are becoming more reliable. This period is towards the far end of radiocarbon dating’s useable range, and encompasses the change from the warmer middle part of the last glacial cycle to the intense cold of the Last Glacial Maximum.

In this paper we looked at dated animal bone for this time range from British sites. Although our observations need further testing, we identified some interesting patterns. Around 34,000 years ago the composition of British fauna apparently changed, with the disappearance of hyaena and woolly rhino. After this time there is evidence for a restricted range of animals, with wolf as the main predator. These changes may relate to the greater snow-cover that accompanied the climatic downturn. 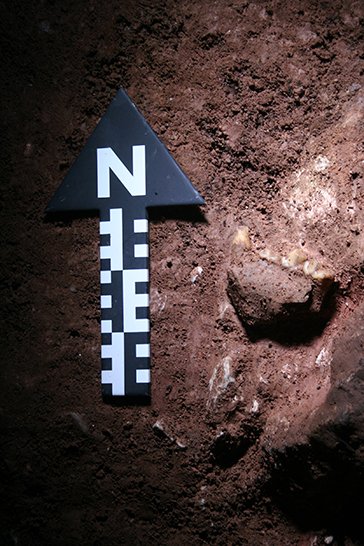 The ‘Aurignacian’ is often thought to be the marker of Europe’s earliest modern humans. In comparison to regions farther south the Aurignacian record of north-western Europe is generally poor. The exception is southern Belgium, which is home to several rich Aurignacian cave sites.

In this article we looked at the c.36,000 year old stone tool assemblage from the site of Trou du Renard (=‘Fox Hole’), which is typical of Late Aurignacian assemblages across Western Europe. Much of the site’s stone-working activity relates to the production of small (1-2cm long), twisted bladelets, possibly showing that Trou du Renard was a short-term camp where hunting equipment was renewed or replaced. We suggest that the Belgian sites of Trou du Renard, Maisières Canal and Trou Walou may be three parts of the same Late Aurignacian landscape. Their stone tool assemblages differ, but the small bladelets produced were all of a standardised size and form. The differences may therefore simply relate to how close each site was to sources of flint. 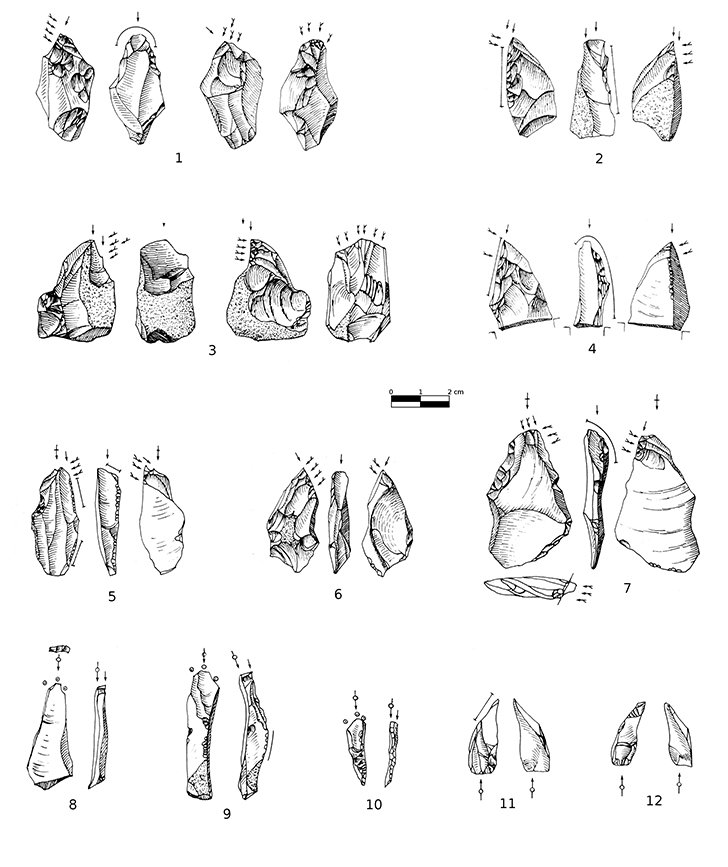 Waste products from the creation of small bladelets at Trou Du Renard, around 36,000 years ago (illustrations from Otte, 1976)